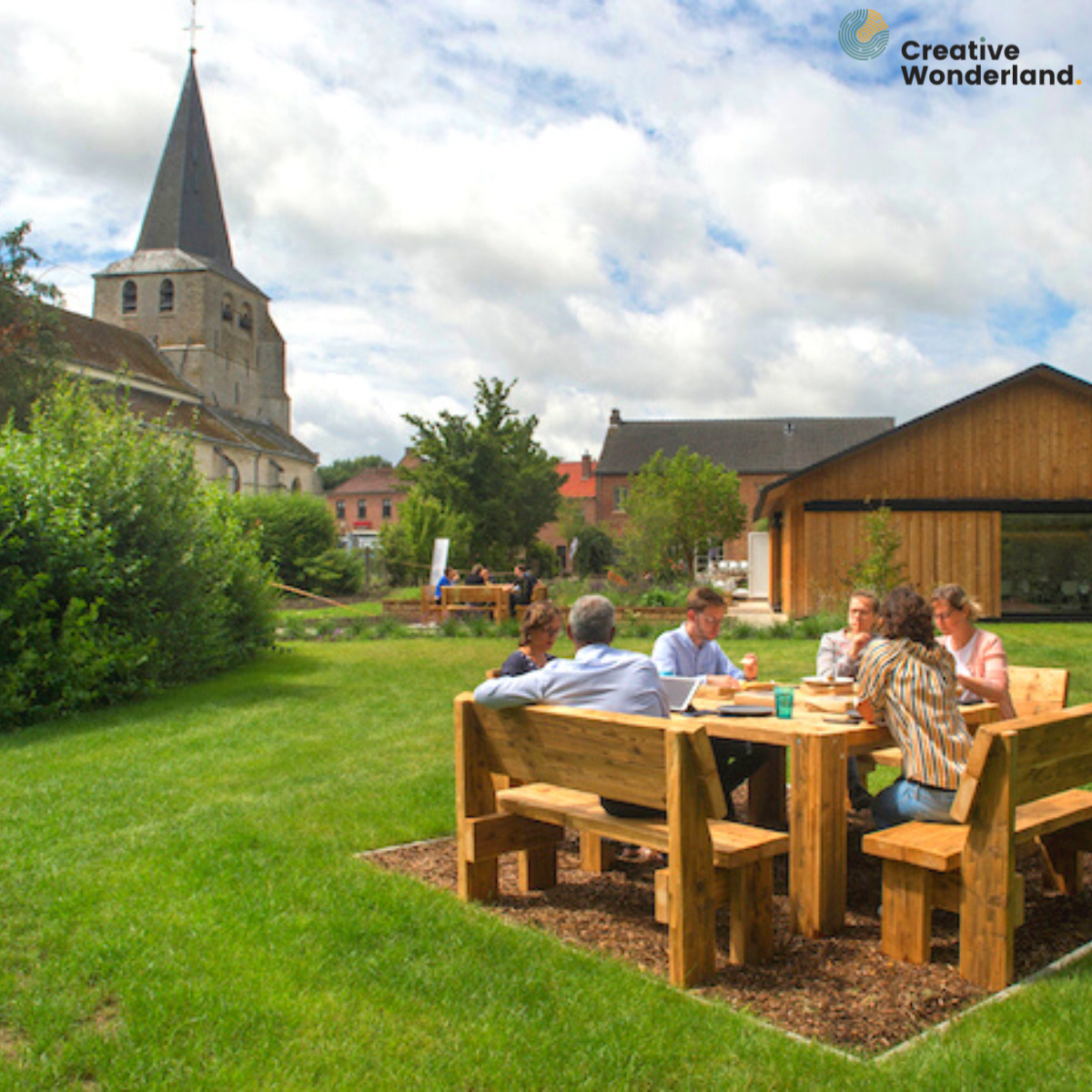 Our glory(s) [1] Meldert, the 7 reasons why Creative Wonderland is the most heavenly place to meet near Leuven

We both stuck around Leuven after our studies. Although we are actually from Brussels and Antwerp. We found our first home in Leuven, behind the Keizersabdij. There – young, free and childless – we had some fantastic years in a cosy worker’s house with a small garden and a tiger cat Poppy.

Until you do start making some future plans. Where surely a child or 2 would fit in, and possibly a dog? And that child or two, and certainly that dog, didn’t fit in our little house. So we started looking for something bigger, and also some garden for those kids and that dog to romp around in (then it gets less dirty inside, right? Yah, I quickly lost that illusion…). And what everyone knows, and we quickly found out, is that a normal budget and a family home with a garden in Leuven don’t go together. So you gradually draw beautiful concentric circles around that magical city. And each time we pushed the boundary of ‘that’s too far from Leuven’ further away.

Until we saw a house for sale in Meldert in early 2010. Again, the circle around Leuven widened a bit. On a beautiful day in early March, we went looking. I was heavily pregnant with our first child. And to be honest, I didn’t really feel like looking at a house again after three years of searching and countless viewings. Especially located so far from Leuven. And yet, we both lost our hearts there that day. A house full of character, in need of a thorough renovation though. And then the garden! “Slightly” bigger than we had planned. But we didn’t let that stop us! The 2 large sheds in the garden gave us instant sweet dreams of different life….

And the rest passed me by somewhat (because of, yes, being heavily pregnant). 2 weeks filled with visits with the architect, with the parents and all the hassle with the bank. To then sign the compromise! To give birth 2 weeks later to our first child. But that’s another story (let’s be brief: we gave birth almost 3 weeks early on 1 April…).

And thanks to a super-enthusiastic father-in-law, information about Meldert started pouring into our mailbox. Did you know:

1. Meldert has the only real Flemish Hogwarts, namely the St.-Janscollege?

Founded on the site where the castle of the Lords of Meldert once stood and recently restored to its full glory. The former boarding school was also the location of the television show “De Jeugd van Tegenwoordig” broadcast by VT4 in 2008. Twenty-four Flemish schoolchildren, flitted back to a very strict boarding school. With no television, internet or mobile phone. Spartan rooms, a rigid daily schedule, a skimpy diet. Under the wool at nine in the evening and woken at six in the morning by the director’s loud bell. Entertainment guaranteed!

We live on St.-Ermelindisstraat (always nice to have to give your address somewhere…), next to St.-Ermelindis Church and St.-Ermelindis Chapel with underground spring bubbling up under its mausoleum. From Creative Wonderland and the terrace in front of meeting room Create, you have a great view of both the chapel and the church. And the bell tower reminds you every half hour of the passing of time…

3. Ermelindis is the first Flemish saint?

A descendant of a rich and considerable lineage, she knew by the age of 12 that she did not want to be married off but wanted to live a godly life. To this end, she moved to Bevekom. There she was besieged by Bavo, lord of Beauvechain. She fled to the village of Meldert, where she spent the rest of her life as a hermit. Living to the rhythm of nature, as a “lily among thorns” [2]. Every year we celebrate her during the weekend of Pinksteren, complete with an ancient Flemish procession, in which our daughters have joined since kindergarten.

4. Meldert is listed as one of the 50 most beautiful villages in Flanders [3]?

And is described as: many lords and a lady? According to this book, the lords of Meldert appeared for the first time in history in 1279, starting with a certain Iwein of Meldert. One lord succeeded another, and these lords regarded St. Ermelindis as their supreme saint. This made them reach deep into their pockets to finance the house of God. To this we still owe our outgrown church and chapel, which are a bit more substantial than one would expect in a small village.

5. Meldert really is the village of choice for meetings in the countryside?

The St.-Janscollege, located at walking distance, is surrounded by the woods of Meldert with its 24 ha of greenery. Our garden borders the Mene-Jordaan nature reserve, managed by Natuurpunt. And at Meldert church is the starting point of the beautiful Mene- and Jordaan walk [4]. This 9 km walk is well worthwhile. It takes you right in the middle of the nature reserve and passes beautiful farms. Waterproof shoes or boots are recommended, especially in winter. With our dog, we have since discovered many shorter (and less muddy) routes. Feel free to ask us!

Did you know that many people talk to us about being surprised by so much natural beauty so close to Leuven?

6. Meldert is home to interesting fauna as well as beautiful flora?

There are several breeding sites of the grass snake in the Mene and Jordan valleys and Meldert forest. It is totally harmless to humans and very shy. As little snakes, they are super-cutie (dixit our daughters). But they can look impressive at up to 2 meters long! Furthermore, we have an impressive collection of feathered creatures here: from buzzards, falcons, woodpeckers, herons, kingfishers to the cutest tailed tits and wrens. In summer, you will be joined at night by hunting bats. In autumn and spring you can hear owls calling.

Last but not least, we have our own mini nature reserve. Our peacefully coexisting flock of sheep and flock of chickens, with the impressive collection of dragonflies around the pond. We host a new generation of frogs and toads every year. And in autumn, we are regularly surprised by the antics of the local squirrel family. Want to experience it for yourself? Our sitting well Perspective really is the perfect place for that. Nestle into the cushions and be amazed!

When we both still worked outside the home, the drive home was always an incredible respite after a busy working day. Once you leave the nearby village, the track automatically leads you through beautiful open fields with breathtaking views. In summer, you can easily imagine yourself in Italy here. Once you arrive at Creative Wonderland, our garden is always a bit of a holiday too. Various nooks and benches can be discovered throughout the garden. Take a walk through our own little forest. Admire the ancient willow by the stream. Discover our girls’ favourite hiding place under the elderberry bushes. Daydreaming for the advanced? Laze in the hammocks among the alders and the peacefully grazing sheep; or among the rustling reeds at the willow hut. Or get all zen on the bench by the sheep pasture.

Did you know that there are 3 Melderts in Belgium? One near Aalst and Hasselt? That when we have someone on the phone telling us “the St-Ermelindisstraat is not in my GPS, is that a new street?”, we already feel the buzz? The first time we encountered this was at our eldest daughter’s christening. The BBQ chef was in Limburg… Let’s just say we had a long reception. And that everyone was happy before we started eating 😀. Want to play for sure? Then enter Hoegaarden on your GPS, you’ll always be right!

Would you also like to experience what it is like to meet in a unique setting, next to a historic church and chapel, in the greenery? Contact us to visit our meeting room, or request a quote right away! We look forward to welcoming you at Creative Wonderland!

P.S. And for the curious among us: we still have that tiger cat that has reached the blessed age of 17. The 2 children (daughters) are here, as is the dog (a bitch) 😀. What was not planned, and in the meantime we were also able to welcome into our family are 6 sheep (ewes), 2 cats (brother and sister) and recently 13 chickens, including 1 rooster … The ladies are still in the majority, so our house is now rather something of many ladies, some gentlemen 😀.

[1] ” A seigniory is a possession of a lord to which certain seigniorial rights are attached. As a form of governance, seigniories emerged from a feudal subdivision of governmental authority in the Middle Ages. The term seigniory then denotes the territory or fief of a landlord, who exercised full lordly rights in this area.” Source: Wikipedia.

[2] Book published in honour of the Exhibition organised by the Hoegaardse Heemkundige Kring with the cooperation of the King Baudouin Foundation and the support of the National Lottery ” Meldert Voormalige Heerlijkheid van het Hertogdom Brabant” (1984).